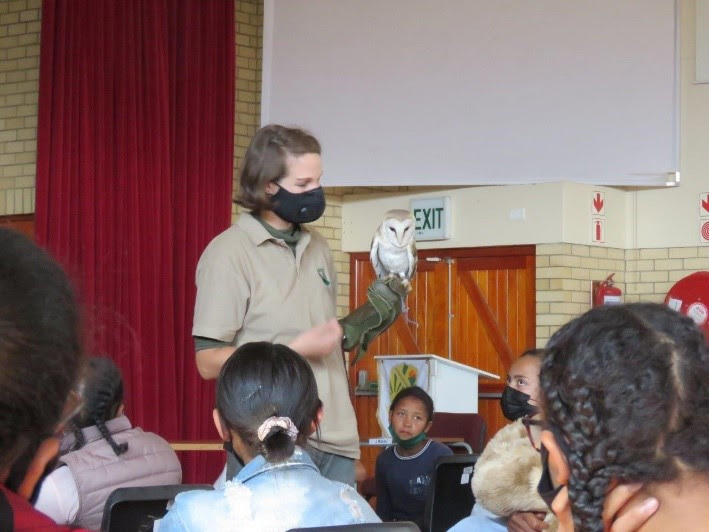 Learners from Hillwood Primary and Floreat Primary were treated to a visit from some very special guests on Friday 11 June when they attended an educational talk by Spier’s Eagle Encounters programme in the Hillwood school hall, organised in part by the Cape Bird Club.

The learners, who were mostly Grade 5, 6 and 7, had the opportunity to observe rare raptor species and learn about their physiology, diet, behaviour and conservation, while getting a unique up-close-and-personal experience of the birds themselves and a taste of the work that falconers and wildlife rehabilitators do on a daily basis.

The four habituated birds that the learners got to see in action were “Sky”, a Southern White-faced Owl; “Ziggy”, a Western Barn Owl; “Storm”, a Lanner Falcon; and – arguably the highlight of the day – “Morticia”, an exotic Harris Hawk. For many of the learners, this was their first time seeing an owl or other live raptor in the flesh, and the intimate and personalised experience gave them a close-up view of these species and their unique behaviours and adaptations which few people experience in their lifetimes.

The learners also got to experience the unique personalities and idiosyncrasies of the birds, and gain insight into some of the challenges faced by animal handlers – in particular, the unpredictability of working with animals was hilariously demonstrated by Ziggy the Barn Owl, who decided to simply ignore his handler’s commands and fly up into the rafters of the school hall for the duration of his demonstration. His antics drew many giggles from the captivated audience.

Following the demonstration, learners were also given the opportunity to stroke Ziggy while his handler distracted him with treats. While many of the learners were initially hesitant, it seemed that any fear or trepidation quickly gave way to curiosity, with many of the learners – and some of the adults – returning multiple times for repeated opportunities to pet the endlessly patient owl. However, the presentation also managed to combine education with entertainment, with the learners gaining insight into both the ecological and economic importance of raptors, and current threats facing their populations – in particular, the threats posed by rat poison and other toxic methods of pest control, which can kill raptors and other predators that eat poisoned pest species, thereby disrupting local ecosystems and the functioning of food webs.

By providing learners with personal experience and education regarding native raptors, the Cape Bird Club hopes to foster interest and enthusiasm for birds and wildlife conservation among the younger generation, and provide learners with the tools and knowledge to become involved and empowered contributors to citizen science and conservation efforts. We hope that the unique experience provided by Eagle Encounters proves to be unforgettable for the learners who attended, and that the Cape Bird Club is able to assist in many more educational endeavours of this nature to inspire the ornithologists of the future.

Special thanks go to Lauren Conradie from Eagle Encounters and the heads of Hillwood and Floreat Primary for organising the event, and to Priscilla Beeton for providing photographs.