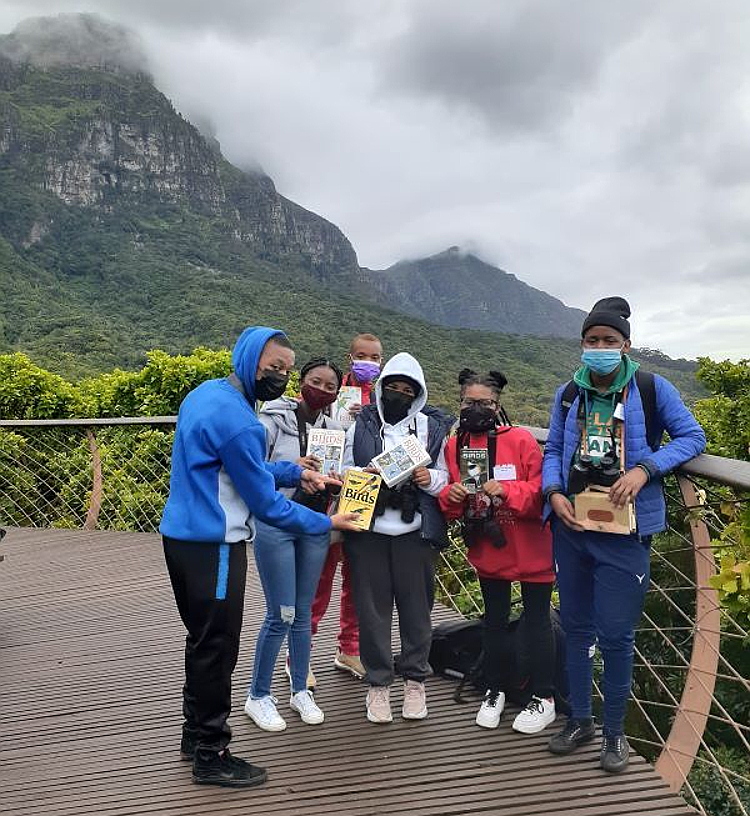 We were wanting to have a final outing for the Claremont High Bird Club, and a trip to Kirstenbosch was arranged for Monday the 6th December. They had finished their exams on the Friday before that, so it was an ideal way to relax after a busy term. Although the sign-up of nine students was lower than we had hoped, they included a core of very keen, new birders. I was very grateful to have the help of Priscilla Beeton, Alison Gilbert, Pat Thompson and Sue Lindsey as group leaders.

The weather was very overcast, with drizzle, as we gathered in the school carpark, but that was soon evaporated by the teenagers’ enthusiasm. The students who had attended all three outings during the year received field guides which had been donated by members of the Cape Bird Club. The field guides created considerable interest and were promptly put to use.

One of the aims of the walk was to see the African Paradise and two Dusky Flycatcher nests in the Dell. Half of the group went to the Enchanted Forest and Boomslang first, while the others started with the Dell, so as to not to put pressure on these nests. The students were all excited to get good views of either the male flying past, or one of the adults feeding the chicks. The Dusky Flycatcher nests in the Dell were well-constructed and neatly hidden away in the trunks of yellowwood trees.

An unexpected bonus was seeing two Lemon Doves, which stayed long enough for Priscilla’s group to join us from further down. These were lifers for nearly all the students. As we were leaving the Dell, Alison spotted a pair of Olive Woodpeckers, which caused a great deal of interest. There was further excitement as we sat on the stone steps, having our tea and snacks. An owl, sitting in the Kiggelaria africana, was dive-bombed five times by a screeching Rock Kestrel. The two volunteer guides, Pat and Sue, said they had never seen this before! A cherry on top was a Malachite Sunbird sitting on top of the same tree.
After the break, we headed to the Boomslang, where the view and a few selfies were enjoyed.

On the way down, we had a close view of a Cape Sugarbird on a mimetes bush, while others saw a Bar-throated Apalis. Our final tally showed that we had seen or heard 29 bird species (including one which was heard only). It was a very pleasing achievement for a chilly day, with mostly inexperienced birders!

The CHS driver and mini-bus were due in ten minutes when we reached the car park, so there was just enough time to present awards for the morning.

Three students received laminated bird posters and chocolates. They were Uzziel, on her first proper bird outing, for her observation skills, Thandokazi for her enthusiasm and assistance in organizing the outing and Buhle, for sharing his knowledge with his group. Alison Gilbert got the award for the best adult sighting for her Olive Woodpeckers. All the students received a 2021 BirdLife magazine to read during the holidays.

Special thanks go to the leaders, Priscilla, Pat, Sue and Alison, for their invaluable help and to Nick Chadwick for co-ordinating the outing. We were also very grateful to Ed Doe for transporting the students. The cost of the entrance tickets for the students was covered by a generous donation from a CBC member, which was much appreciated.

Thank you, too, to the many CBC members who donated field guides, reference books and magazines in response to the appeals in the newsletter earlier this year. We plan to continue handing them out at our next CHS outing, to be held in the first term of 2022.

Here are some comments written by two students, on the WhatsApp group, about their highlights:

“My favourite sighting today was the Paradise Flycatcher cos that was a beautiful sight. It took a very long time and was hard to spot, but when we managed to, we saw a rare sight of it feeding its young.”
Buhle (Grade 11)

“My favourite sighting was probably the Common Waxbill. Regardless of size, it was really nice seeing such a close-up of it.”
Thandokazi (Grade 11)