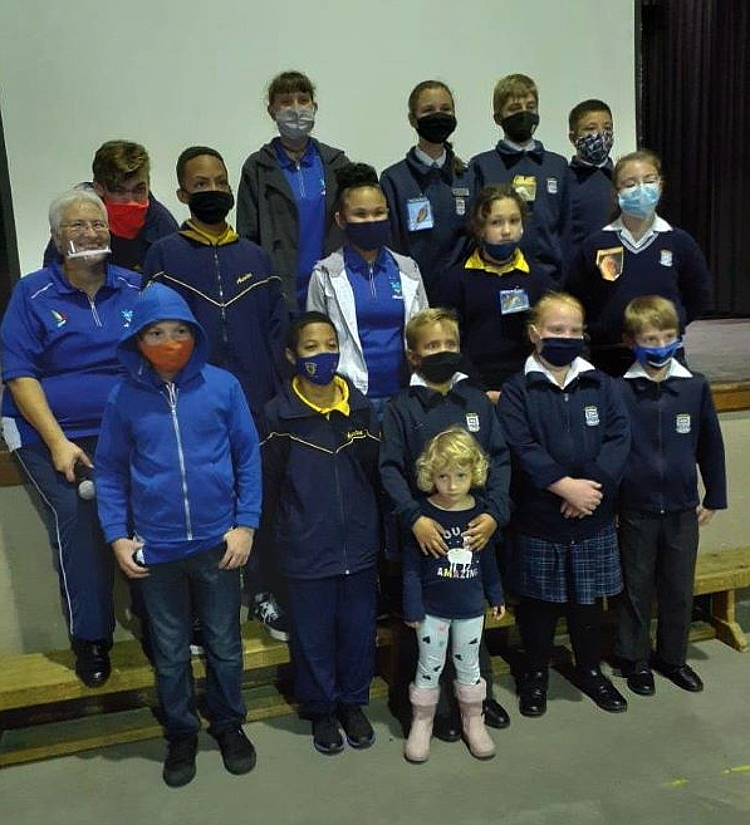 We were placed in different groups by Erna de Wit, the teacher who organized the event – just 3 or 4 around each table, so that we were able to maintain social distancing – and all Covid protocols were followed.

What an event it was! Participants were welcomed to the event by the school band, most members of which played very unconventional instruments, accompanying the headmaster, singing the words of a welcome song composed by Erna herself.

There were effectively three quizzes running concurrently – Beginners, Birders and so-called Twitchers. Most of the children who had ‘lists’ of under 300 birds were in the Beginners Group. There were two school clubs represented – Aristea Primary and Paul Greyling Primary from Fish Hoek, plus some other children from bird clubs. Zoe Lunau-Johns (14), Sam Cohen (10) and Tim Cohen (7) were from the Cape Bird Club and all acquitted themselves incredibly well. Zoe and Tim were in the winning team of the Beginners Group. Sam was in the Birders Group (the only child amongst adults) and he was able to answer most of a much harder set of questions. Penny Dichmont was in the Birders Group with Sam, while Barry Cohen was in the so-called Twitchers Group (so-called because none of us felt that we have sufficient birds on our lists to be called that!) with Gillian Barnes and me. The Twitchers narrowly beat the Birders. The winning teams each received a copy of a birding reference book.
Barry Cohen donated 8 copies of Faansie’s Book for Kids which were very well received by the fledgling bird clubs as prizes, and we thank him for his generosity.

Erna made sure every single participant received an award of some kind – cleverly engineered by providing every participant with a unique badge with a bird on it which had to be identified before you could collect your prize. Also participants were allowed to use their bird books and apps to help answer questions so the event was very much a learning experience for the Beginners who learned to navigate their way around their bird guides. This meant that time was of the essence – the better you knew your birds or knew how to effectively use your bird guide, the better you scored! The Birders and Twitchers were given only a few seconds to answer any question so the fact that the quiz was an open book one meant little to those two groups!

On their different levels all three quizzes were challenging, and the morning was great fun. Tygerberg Bird Club and Somerset West Bird Club also participated in the event, and it was a time to make new friends and meet with old. Thank you Erna, and all your colleagues at the school, who helped to make this a really good and successful event!