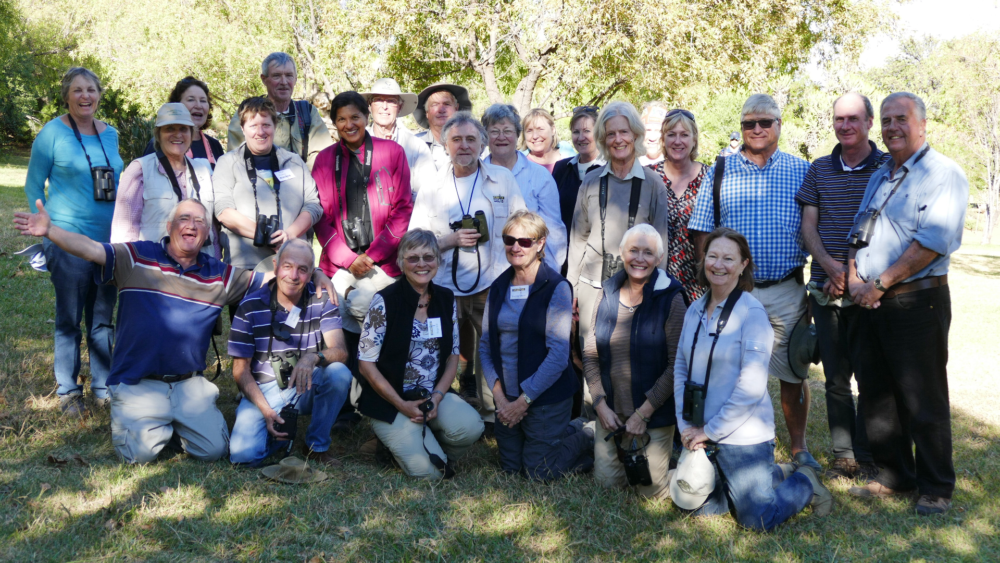 Twenty five birders or birders and companions, travelled via various routes to Slanghoek, near Rawsonville on Friday 29 April in wintery conditions for the annual Cape Bird Club ‘s camp. Seven were camping and the rest were staying in safari tents and chalets. Most of us were there by lunchtime and we met our fellow campers while pitching our tents. This is a beautiful campsite, with shady trees and a river between the two sections. Each site has its own ablution facilities. The resort above the road is also lovely , with trees, swimming pools, putt putt and a small shop.

Everyone met at the main resort at 6pm for the briefing in the lapa followed by a communal braai. There were a number of new faces but soon everyone introduced themselves and chatted away, whilst the fires were lit. Mel Tripp and Simon Fogarty were our camp leaders and had organised enough braai wood for the weekend in exchange for a resort bird list. Mel started the evening by paying tribute to Anne and read the article that Vernon had written for Promerops. He also thanked Priscilla Beeton, our Chairperson for organising the venue and keeping everyone informed. We then had a chance to braai and socialise and also sort out vehicles for the next day.

Saturday, saw some bleary-eyed campers arrive to meet the others at 07.30, having been kept awake by late night revellers till 2.45am, despite the 11pm noise curfew. The weather was chilly -5 degrees but we were soon off to the morning venue, Mitchell’s Pass. We managed a few interesting birds en route, namely Giant Kingfisher and a cryptic juvenile Jackal Buzzard. We parked at Die Tolhuis in the pass and this was to be a search for Protea Seedeater. We soon had excellent sightings of Streaky-headed Seedeater, African Olive Pigeons and Olive Thrush before clambering up to the railway track (recently being used again over weekends with a steam engine between Ceres and Wolseley). Fortunately no train appeared and no Protea Seedeaters or Ground Woodpeckers either. There were lots of Sunbirds, Malachite, Southern Double-collared and beautiful Orange-breasted, as well as Cape Rock Thrush, Familiar Chat, Cape Bunting and Cape Sugarbird.

As the parking is rather restricted, we had to leave and so did not get to have their famous coffee and roosterbrood. Instead, we had our own snacks and drinks in the parking area at the Zip slide at the entrance to Ceres, followed by a disappointing walk there, lots of litter and undesirables. Mel, Simon and Des had seen good birds near the Slanghoek causeway the previous afternoon, including Cinnamon-breasted Bunting, a Western Cape rarity , so off we set. The causeway had been closed due to flooding but was now open but a sneaky wind kept the birds away and hunger drove us back to camp. After lunch, those who wanted to try for the bunting returned to the causeway, while the rest relaxed and birded around the camp and resort. The area
around the chalets and above the look-out deck was very productive with a sighting of Cardinal Woodpecker (Friday), as well as Swee Waxbills, Sugarbirds, Sunbirds, Neddicky, Cape Batis, Speckled Mousebirds, Cape Bunting, Fork-tailed Drongo, Cape Grassbird and lots of Fiscal Flycatchers to name a few

The lapa was again our braai spot at 6pm. Still no Cinnamon-breasted Bunting but lots of socialising around the fires and at the tables, swapping notes on trips and birding and our list was growing with Barn and Spotted Eagle Owls which were heard in the resort.

Sunday we met at 7am. Having reported the revellers, we had a good night’s sleep but it was freezing, so beanies, scarves, jackets and gloves were the order of the day. We headed off through Worcester in the direction of Robertson, passing Rooiberg Winery, where we turned off left on the Vinkrivier/Nuy road, against the mountains towards Worcester. Soon we were stopping and adding birds to our lists, Namaqua Dove, Brown-throated and Rock Martin, Cape and House Sparrow, Acacia Pied Barbet, Southern Red and Yellow Bishop, Bokmakierie, Brimstone, White-throated, Yellow and Cape Canary, Reed Cormorant, Large-billed Lark (the only lark we saw), Three-banded Plover, Bar-throated Apalis and Karoo Prinia. There were also good sightings of Karoo Scrub-Robin, South African Shelduck, Pied Starling, African Stonechat and Greater Striped Swallows, a bit late, perhaps overwintering. Some Cape Wagtails were pretending to be waders and confused a number of us.

There were a couple of elegant Pale Chanting Goshawks showing off their plumage. Mel had arranged a visit to a farm where Verreaux’s Eagles are breeding and we eventually got there by midday, after a tea break at a causeway, where we managed to get good views of Bar-throated Apalis and Chestnut-vented Tit-babbler. By then it was quite warm and after some confusion about instructions on the farm, we parked and walked along a track in the direction of the eagles. Once more hunger and the heat prevailed and so we turned back to the vehicles. Some got good views of a female Olive Woodpecker and there were large numbers of sunbirds around. Still no Fairy Flycatchers, which we had hoped to see.

On our way to the Karoo National Botanical Gardens where we would picnic, a Southern Black Korhaan were seen by some. At last we had lunch under shady trees in the gardens and where our group photo was taken. We then birded or just strolled around the gardens and the botanists in our group enjoyed another perspective of the outing. We saw all three mousebirds and an Acacia Pied Barbet at its nest, before heading back to the camp. Some saw a flock of about 300 Red-billed Queleas on the way back, exciting for some but scary for farmers.

Another very social evening braai took place in the lapa and we did our list for the day and weekend, ending on 93 confirmed species. The next morning started with a walk through the campsite at 8, around the dam and up to the resort. Most birds were still in bed, as it was another chilly start. Some had to leave early and the campers had to pack up. Some interesting sightings happened on the way home. As luck would have it, Grant and Geraldine Tarr saw a Verreaux’s Eagle in Bain’s Kloof as well as a Ground Woodpecker. Mel, Simon and Des found Protea Seedeater in Du Toit’s Kloof but that is birding.

This was a special camp , with new friendships forged and a huge thank you to Priscilla for the excellent organisation and the lovely venue chosen. Also to Mel and Simon who did the recces and planned the routes to make sure that everything ran smoothly.

Thanks again to all for a really special time of birding and fun.